W. Brett Wilson is a well know Canadian entrepreneur and philanthropist.  He also recognized as one of the “Dragons” on CBC’s Dragons’ Den.

Reading up on Mr.Wilson via Wikipedia, he is originally from North Battleford, Saskatchewan, he graduated from the University of Saskatchewan with a Bachelor of Science in Civil Engineering and work for Imperial Oil in Western Canada.  Eventually bringing him to graduate from The University of Calgary’s MBA program, the first person to graduate with a specialization in entrepreneurship, in 1985, and began work as an investment banker with McLeod Young Weir Limited, now known as ScotiaMcLeod or Scotia Capital.  He then co-founded an investment banking advisory firm, Wilson Mackie & Co., in 1991 – a firm that enjoyed considerable success brokering oil and gas companies and properties.  And that was just the beginning.
So what does one do with their success and rise to the top of the ladder?  You continue to strive to be the best you can be. Making investments in opportunities that hopefully lead to success.  But, he clearly has made mistakes in the past, but always learning from them.  He outlined that in his recent book “Redefining Success: Still Making Mistakes” available through Penguin Books.  (Read a review of his book through Brighter Business Empower’s Sheri Bruneau here.)

But what really catches my eye and attention with Mr. Wilson is his passion and dedication to give back.  His philanthropic ways can be found on his website www.wbrettwilson.ca.  He’s been described as a “capitalist with a heart.”  Nothing wrong with that!!  Perhaps that’s what I love most about him.  He’s made it a priority to give back.  He actually does care!  And now is your chance to give back too.  And you can give back with a big old KISS. 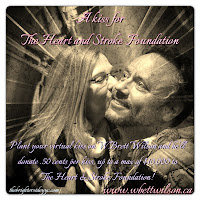 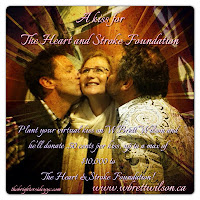 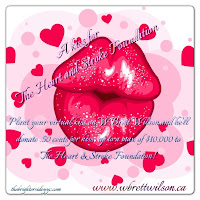 Until Feb.15th, you can go online to www.wbrettwilson.ca and plant a virtual kiss on his cheek through animation on his site, and Brett will donate 50 cents per web kiss, up to a max of $10,000, to the Heart and Stroke Foundation in support of heart disease and stroke research.  Last year, Wilson donated the full $10,000 in a similar campaign.

To get the ball rolling, I met up with the philanthropist and planted a kiss on him… I hope that counts Brett!  Go show him some love!  Go now!  It ends Feb.15th. (Okay... I got a little more than expected... a double smooch... with Eric Francis (from Jack FM) and Brett Wilson!!  For that I'll personally donate $10 per kiss!!  Thanks Gentlemen!)