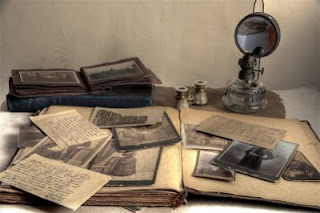 We went to England for a beautiful wedding and ended coming back home with so much more than a trip of memories.  It was a trip of emotion and discovery.  My search began while writing about the Faces Behind The Poppy.  A story about my grandfather who fought in the Canadian Armed Forces for WWII.  But his roots were from Taunton England.   I didn't have much to go off of, other than my grandfather James Henry Rowsell lived in Taunton England from when he was born until he was about 10.  His own father William J Rowsell served in the British Army in WWI, but his where about is unknown.  To this day, we do not know where he ended up.  According to my father, his mother only told him what she knew.  And that was very little.  As my grandfather (James Henry Rowsell) passed away when my father was only 3.  And not much more was spoken of.

Here's what we know.  My grandfather James Henry Rowsell and his mother Alice Manning lived in a small home in Taunton England.  When he was about 10 they immigrated to Canada, with hopes of finding his father.  Our understanding is that William J Rowsell had amnesia from the war and got on a boat and went to Canada.  My grandfather and his mother never found William. So now, some 100 years later, I've started on my quest to find my great grandfather William J Rowsell.

While in England, we drove to Taunton.  Other than my great grandfather's name, I had the address of where my grandfather grew up.  I don't even have my great grandfather's birth date.  But through all the records, somehow the address of where he grew up was in our records.  Having never searched for a lost loved one, I had no idea where to start.  So, I started with the address.  And to my surprise, there it was.  A home in Taunton England, where my grandfather grew up.  So... I knocked on the door.  To my surprise, a young woman in her late 20's early 30's answered.  I explained my story that I had this address and thought that maybe my grandfather grew up here, and she let me in.  Her name was Rebecca and she was in the process of packing and moving to Ireland.  After discussing the history of her home, we believe that it's possible that my grandfather and his mother could have made this their home.  It was originally built in 1910, and that's when my grandfather was born.  Thank you Rebecca for your kindness and letting me in to take some pictures.  While I was there, I really had a sense of my great grandfather being there.  I didn't feel as though my grandfather was though.  Perhaps that's because we knew where he was, back in Canada and knew where he was buried.

While in Taunton, we also visited the local museum The Museum of Somerset.  It really took my breath away, as I had an overwhelming feeling that this is where my family history lies.  While there I found a book called Tracing Your First World War ancestors by Simon Fowler.  From the first chapter I was intrigued as to what I can find.  "Even though the First World War lasted only a little over four years and while there is almost nobody now alive who can remember it, it continues to fascinate historians - professional and amateur alike.  Most people are drawn to the subject by a desire to find out what happened to an individual, often a father or grandfather, during their military service, or are moved by the names on a local war memorial and want to know more about these men."  That's me!  The amateur who wants to find out about a great grandfather.  In this book, Simon Fowler gives you a starting point.  First and foremost, write down definite facts as well as anything that your are not absolutely sure of.  He also suggests that it's pretty important to know which service (Army, Royal Navy, Royal Air Force) he was with.  Find out which unit he served with, regiment or corps for the army, ships in the Navy and squadron in the Air Force.  Find out when he served and when he was discharged.  Do you know his date of death if killed in action or died of wounds?  Where he served, usually, but not always, the Western Front (usually referred to as 'France and Flanders' in the records).  Find out what injuries or disabilities resulted from his war service.  They may have been physical such as an artificial leg or shrapnel in the body, or psychological - perhaps he was plagued by recurring nightmares?  Also, see if he was awarded any medals.

Okay... I thought to myself... this is all great if you have this information.  All I have is his name, no birth date, no information as to his regimental number, where he served, or even if he survived.  He had amnesia, and according to my grandmother, he got on a boat and went to Canada.  Now what?  So I certainly have a lot more work to do.  This will be a challenge, but I'm up for it.  My heart tells me my great grandfather made his way back to England, although his wife and son made new roots and family in Canada.  I can't help but think that what if the Unknown Warrior in Westminster Abbey was my great grandfather?  Perhaps it is, perhaps it's not.  After visiting Westminster Abbey and seeing the Unknown Warrior, my heart was torn towards the family that never knew what happened to him.  A reminder for us all that we should all take a moment of silence on November 11th to remember those gave us a lifetime of freedom.  For those who served, those who survived, those who died and those who serve today.  Lest we forget.

At the west end of the Nave of Westminster Abbey is the grave of the Unknown Warrior, whose body was brought from France to be buried here on 11 November 1920. The grave, which contains soil from France, is covered by a slab of black Belgian marble from a quarry near Namur. On it is the following inscription, composed by Herbert Ryle, Dean of Westminster: 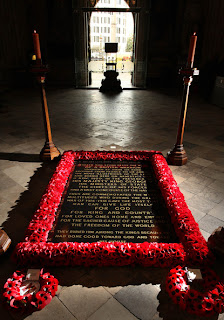 BENEATH THIS STONE RESTS THE BODY
OF A BRITISH WARRIOR
UNKNOWN BY NAME OR RANK
BROUGHT FROM FRANCE TO LIE AMONG
THE MOST ILLUSTRIOUS OF THE LAND
AND BURIED HERE ON ARMISTICE DAY
11 NOV: 1920, IN THE PRESENCE OF
HIS MAJESTY KING GEORGE V
HIS MINISTERS OF STATE
THE CHIEFS OF HIS FORCES
AND A VAST CONCOURSE OF THE NATION
THUS ARE COMMEMORATED THE MANY
MULTITUDES WHO DURING THE GREAT
WAR OF 1914-1918 GAVE THE MOST THAT
MAN CAN GIVE LIFE ITSELF
FOR GOD
FOR KING AND COUNTRY
FOR LOVED ONES HOME AND EMPIRE
FOR THE SACRED CAUSE OF JUSTICE AND
THE FREEDOM OF THE WORLD
THEY BURIED HIM AMONG THE KINGS BECAUSE HE
HAD DONE GOOD TOWARD GOD AND TOWARD
HIS HOUSE