Last week I was introduced to a fellow blogger.  Mike's Bloggity Blog.  I instantly fell in love with him (so to speak...).  Believe it or not we met painting bowls for the Empty Bowl Benefit for the Calgary Food Bank (watch for information on that this Friday April 27th).

Look no further than Mike's Bloggity Blog for your fill of Canadian Content!  FINALLY!  This adorable, bald blogger has what I've been looking for on Canadian Entertainment.  Our country is full of artistic life, and Mike will showcase it all!  He'll give you a dose of television, albums, concerts, live theatre, books and anything Canadian Entertainment (even Canadian politics... which can be entertaining!)  Plus don't miss out on his contests. 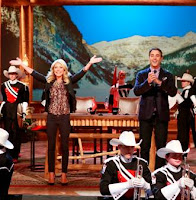 Thanks for the heads up Mike, for the info on Ben Mulroney!  Mr. Ben, will be back on the air with Kelly Ripa!  His first co-hosting duties was when Live With Kelly came to Banff and it was a rating success.  It was the best numbers of the week!  So now they want to bring him back, but this time he'll be live in studio with Kelly in New York city!  Watch for Ben in New York May 4th.  And you have to watch Mike's interview with Kelly Ripa here!  I LOVE that he got her Moosehead Beer!  Nice touch. 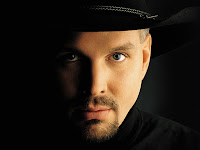 Mike has also expressed his opinion of the Garth Brooks mayhem.  And no, I didn't get tickets either, but looking at the Brighter Side, Mike has started a facebook group trying to convince Garth and his band to add a second show.  Join the conversation here.

Stay in the loop with Canadian Entertainment with Mike's Bloggity Blog!  I love it!  Bookmark it today!