You know that saying, "If you don't ask you don't know." Sometimes it's fear of being rejected or the fear of asking for something that you shouldn't have asked for.

My son has been asking forever if he can get his own YouTube channel. I finally said yes, under one condition, he doesn't show his face. He doesn't need that right now. I want to see if he can first make his own videos, and if he can handle the pressure that comes with posting.

His first video was a success. On his own he found a company that can get a teaser video done for him as he only has QuickTime on his computer, and no video producing programs on is computer. And he did a GREAT job.

But, when it came to do his first audio video, he was terrified at the way he sounded. You know that feeling when you hear yourself for the first time and say, "Whoa... that's not my voice...is it?" He was disappointed that he sounded so young. I explained to him that the more he does it the more he'll get used to the sound of his voice and be able to record with confidence. (This from his mother who has 25 years experience as a radio announcer.)

But, advice from his mother wasn't what he wanted. He then showed me a young YouTube star called Ethan Gamer out of the UK with over a million subscribers. He wanted to know how he could be as good as him, as he's also 10, just like him. I explained that this little boy has been doing this for 3 years and that it took time for him to build up his audience. 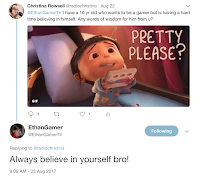 So I thought, maybe a message from Ethan Gamer would help build up my sons confidence. I know that his Ethan Gamer TV twitter was monitored through his parents, so I thought it was worth a shot to send a tweet out... to see if maybe...just maybe I'd get a reply to pass onto my son! And I did!! And he replied to my son, leaving my son with a GREAT BIG SMILE on his face and the positive energy to continue! Thank you Ethan Gamer! You make my little YouTuber happy! More importantly...you inspired him to believe in himself!

Here's my YouTuber sons first produced video How To Install Minecraft Mods...caution to parents...you may not know what the heck he's talking about... but all the kids today are huge into Minecraft! LOL! 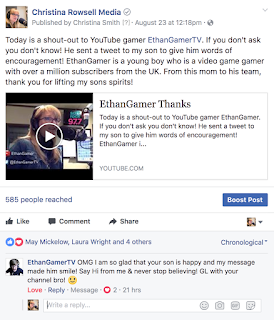 In appreciation to Ethan Gamer TV!

If you don't ask you don't know. Believe in yourself! One #Gamer at a time. @EthanGamerTV via @RadioChristina http://ow.ly/qmOM30eJCE8.