The truth of the matter is... there are good people in this world.  People who dedicate their energy, time and money into giving back.  It's what makes the world go round.  There is GOOD in this world.  There are AMAZING PEOPLE who give back!  And to The Brighter Side, that is a GREAT IDEA!

Be on the look out for "The Philanthropy Channel"!  This new channel will introduce Canadians to inspiring
people and organizations whose philanthropic work makes Canada a better place!  I seriously have goosebumps after being introduced to this project.

Canadians are world leaders in philanthropy.  There are more than 160,000 charities and non-profit organizations that are registered in Canada, and over $1.5 billion is dispersed annually by more than 3,000 Canadian philanthropic foundations, and more than 12 million Canadians offers his or her services as a volunteer every year!  (* The Philanthropy Channel Press Release)

Among other things, the network will offer programming about the philanthropic interests of private individuals and foundations, as well as pop-culture icons such as Bill Gates, Bono and Oprah Winfrey. 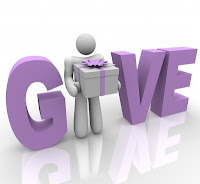 “The Philanthropy Channel is where like-minded people will be able to share their stories and passion for giving and helping at all levels,” says Peter Clarke, founder and President.  “As an independent Canadian broadcaster, we are excited to provide a service that gives voice to those people and organizations that shape social change in our communities and around the world. The Philanthropy Channel will appeal to the philanthropist in all of us.”

"The Philanthropy Channel" Mission:
We are in the business of moving people and making people care. We use storytelling to paint a picture of a more meaningful world. We hope to change the way people view television ~ that is, as a force for good and not just for escapism.

We want to introduce a new narrative on television with programming that is more hope-based than fear-based, where content creators can weave their convictions into their vocation.

We are amplifying the message of philanthropy, compassion and caring for the love of humanity.

The Philanthropy Channel focuses on philanthropy and philanthropists from community organizers to movie stars whose giving inspires all of us to do more.

Our documentary, information and movie programming inspires viewers to become more informed and engaged in the world’s social and moral challenges, both globally and locally.