Review by Christina Rowsell
The Brighter Side 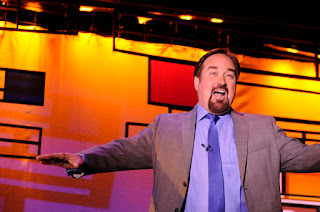 It's the Comedy YOU Play.  This was the first time I've been to Stage West and it wasn't a musical.  But that's okay.  This show had me laughing!  I'm not one that would raise my hand to go onstage, but there were several eager audience members that had the chance to step onstage and become a part of the show.  The "Game Show", with game show host Troy Richards (played by Home Improvements Richard Karn, and former host of "Family Feud".)  Members of the Stage West audience are randomly selected to take part in the "live" taping of the "Game Show" as contestants actually win some GREAT prizes by answering trivia questions. 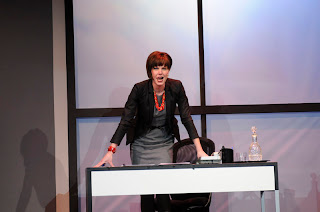 Karn had that charismatic personality, as I expected.  He was great with the audience and quick witted with his response.  I often get that embarrassed, uncomfortable feeling whenever real people get involved in audience participation.  And this show was no different for me.  I hoped that when they stepped on stage they would get the questions right and not make too much of a fool of themselves.  They all did great.  Mind you they chose to be a part of the show.

This production of Game Show had me laughing through out the whole show.  And like every good show there has to be the mischievous character, played by Chantal Perron, Ellen Ryan was the "Game Show" producer who works her wicked ways to have it all! But what will have you on the edge of your seat is the unscripted happenings.  This show has a twist, and without giving away too much, know that you'll love the outcome! 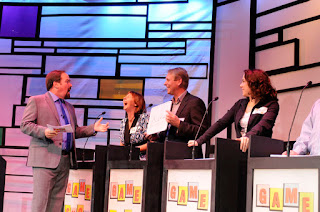 Another GREAT evening out with their delicious buffet and high calibre talent.  Thank you Stage West, another amazing show.